Check out our other Adventures

Our first trip for months in the camper and we were champing at the bit to get on the road, even with the weather forecast being raining and windy. Port Fairy was the destination a place neither of us has been before, yet very high on our list of places to stay. The trip was broken up into a few segments with our first stop at Hoppers Crossing to meet our friend’s new baby, to Immy’s maternal delight. We stopped only at Mortlake thereafter before arriving at Big4 Port Fairy Holiday Park late in the afternoon.

It had been blowing a gale the whole four hours from Lilydale and Port Fairy was consistent to say the least. Gusts of up to 50km/h made for a fun time setting up the camper and the annex. With difficulty and I’m sure great hilarity to those nearby watching, we finally beat the weather gods and thankfully had the annex setup. With the two young kids of 5 and 3 the annex gives us a nice space in the evenings to relax, so it was important for us to get it setup. The evening we spent in the caravan park with the kids playing on the jumping pillow, catching up with other travelers and settling in for an early night.

Air in a big bag = The best invention

The early night intentions of then waking fully rested for the first day of adventuring did not eventuate. The wind through the night was even worse and although Amanda and I obviously slept we both felt we were up all night with the banging and flapping of canvas and random paraphernalia being flown around outside. Thankfully for us though we had the annex setup so all of our belongings were sheltered and even better the kids were none the wiser to the weather’s foul temper during the night!

With the exception of Fletch spilling a whole bowl of cereal onto the camper couch and floor, the morning was uneventful and relaxing. We eventually made our way into town to the local market, which didn’t have any hot sauce, so we left quickly and walked around the centre of town to check out the place. Our eyes are always drawn to opp shops (thrift shops) and antique stores, but what I did not expect to find was a record/book store. I spent far too long in there sifting through boxes of records and chatting with the owner about all manner of music and literature and was amazed that I did not spend any money…at first. There was a record player that called to me as well as a series of Tin Tin comics that I serious need to have!

About town there is a number of historic buildings, which I absolutely love, but none better than the home Amanda’s Poppa Tommy grew up in. Number 1 William Street is now a lovely heritage listed Air BnB, but to her it was the house he was born and grew up in. A number of times as we walked past a street of old bluestone houses we commented how little Tommy would have been running past these houses as a young fella and now our kids are doing the same. 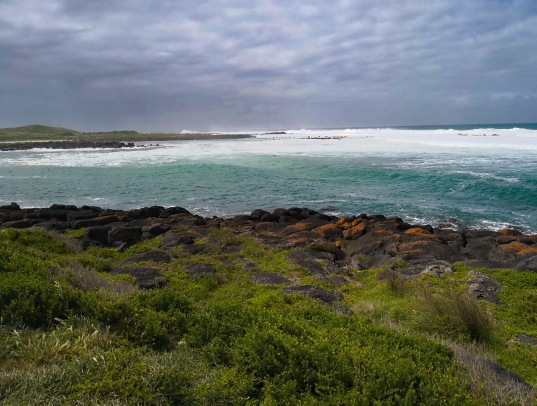 With the wind still blowing, albeit a little less than the day before, we settled for a quick drive around the waterfront and coast stopping for a couple of pics looking out to the raging south sea. Lunch, then a play back at the caravan park and I left to visit a garage sale across the road. I managed to pick out some kids books and a wicker basket I knew Amanda would love because I am a great husband and had nothing to do with a record player and comics flooding my every waking thought.

In the afternoon we decided to visit the Tower Hill Wildlife Reserve as the kids have been obsessed lately with volcanoes in there imaginative play. In their mind, I know they would have imagined a conical mountain with a lava flow spilling over the top, so it was hard to convince them that the lakes and surrounding hill rim was the volcano. Even I was amazed at how big the crater was as we drove our way around it to the visitor centre. 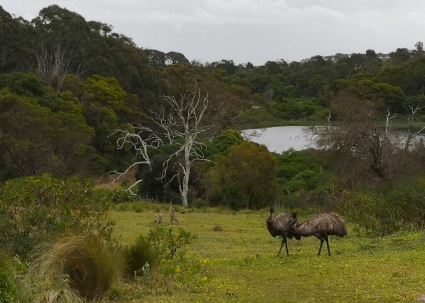 It is extremely picturesque, which is a testament to the work that’s been done there since restoration started in the 1960’s. We went on a couple of the walks, first the Lava Tongue Walk through the wetlands. I was not expecting to see much wildlife as it was overcast and cool, so when we found not one but two copperhead snakes just off the boardwalks we were all pretty excited. As we returned back to the visitor centre we saw the first of many emus, which was exciting enough until we then saw two koalas nestled up in some nearby gumtrees. 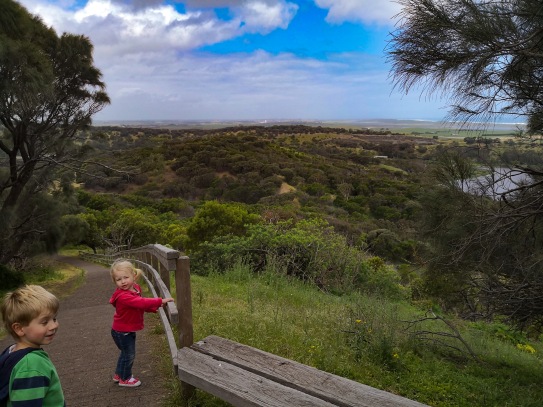 The view from the top of Peak Climb Walk

The other walk we did was the Peak Climb Walk up to the top of the centre hill of the crater. Fletch ran ahead with Amanda in toe and they disappeared to have some bonding time together, leaving Immy and I trudging along at 3-year-old pace. This gave me some quality time with my little lady and also slowed me down enabling me to take in the surroundings in a lot more detail. A great example was spotting a kangaroo off in the scrub that I would have otherwise missed. She surprisingly walked the whole way up the steep inclines telling herself how strong and good she was and that Santa would be so happy with her! Naturally, I emphatically agreed, as I did not want to have to carry her up to the top. The view was worth the climb, with the lakes, volcano rim and coastline in full view.

Back at the caravan park the kids loved playing in the indoor play area for the 5 and unders’ before enjoying some woodfire pizzas by Bambino [Side note: if you see these guys, stop and get the Damo’s Special! You’re welcome].

This is Part One covering our adventure to Port Fairy, so be sure to stay tuned for Parts Two and Three to see what else we got too.

The best place to follow Josh’s adventures with his family is on his Instagram site @josh.duthie. You can see this post and more Adventures of Duth by clicking the link below.

Josh Duthie is a keen writer of action and adventure across mediums such as comics and novels. He is passionate about the environment and conservation and hopes his writing can help to create awareness for both, through his story telling. His blog 'Adventures of Duth' is a casual look into his family outings and a snapshot of parenthood with his wife and his two gorgeous and at times troublesome toddlers. View all posts by Josh Duthie

2 thoughts on “Foul Weather, Family Heritage and Footing it through a Volcano”

This site uses Akismet to reduce spam. Learn how your comment data is processed.